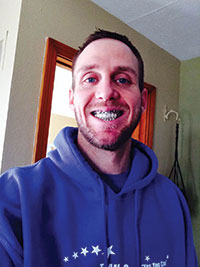 Ryan Parr works at a non-profit sports medicine store in Kansas City, but turns to Reliv nutrition to give him a competitive edge.

Staying Active: I like to stay active. In college, I played basketball, football, track, tennis, and I was a nationally competitive cheerleader. Now in my early 30s, I still play sports and compete in adventure running, 5Ks and half marathons.

Scientific Solution: I lost hope in supplementing. I decided to increase my fruits and veggies instead. When someone told me about Reliv, I was very skeptical. I asked a lot of questions and was impressed by the scientific answers. After taking Reliv, I started feeling better about a month later. It boosted my immune system, and my energy levels are sky high.

Athletic Boost: Reliv has cut my recovery time by a third. Performance-wise, I am faster, stronger and lighter than ever. I am way more efficient now. I wish I would have found Reliv sooner!