May is a wonderful month to celebrate motherhood! Our mothers do so much for us, and it’s time to tell the world how great they are! Did your mother teach you about optimal nutrition? Does she still call to make sure you’re still stocked up with Reliv Now® and LunaRich X®? We asked you to share her best advice to you, and here are the winning responses!

My mother was the best.  She had a way of making everyone feel that they were the most important good person on the earth, she loved with unconditional love. – Margie Porter, Mesa, AZ

My mother is my upline, and she makes sure I take my Reliv shakes correctly and consistently! – Terry Kilburg, Bellevue, IA

My mother introduced Reliv to me when I was 16. I have gone from a broken back to pain-free over the past 17 years and could not have the life I have now without her caring for my health in every way. – Joe Kunze, Grand Prairie, TX

Sheryl Whipple of Woodlands, Texas, knows BUSY. Yet the mother of eight children who home schooled for 20 years and worked part-time as a nurse, found time for Reliv and now reaps the benefits as a Senior Director. After Sheryl and her husband, Peter, attended the Reliv International Conference in July 2005, there was no stopping them. END_OF_DOCUMENT_TOKEN_TO_BE_REPLACED

Diana Hoover of Watsonville, California, lived with migraines for more than two years. They grew increasingly painful and longer in duration throughout 2007. By the end of the year, she was having frequent headaches of such intensity that she ended up in the emergency room, often multiple times in a month.

Doctors worked for two full years trying to figure out why she was having the migraines and performed a number of tests with no definitive result. They tried several medications and theorized that they were a result of a heart murmur she’d had since birth. END_OF_DOCUMENT_TOKEN_TO_BE_REPLACED

Enthusiasm for Reliv Nutrition is Contagious

These days, Paula Kipp of Staunton, Illinois, can actually get out on the court and play basketball with her children, something the working mother of three would never have dreamed of before Reliv. END_OF_DOCUMENT_TOKEN_TO_BE_REPLACED

Rediscovering What it Means to Feel Good

With seven children between the ages of two and 25, Patricia Wallace of Madison, Missouri, was used to feeling tired all the time and dealing with what she thought were “ordinary” aches and pains. END_OF_DOCUMENT_TOKEN_TO_BE_REPLACED

Feeling Younger and Better Than Ever

After staying home to raise her eight children, Linda Pixton, of O’Fallon, Illinois, was pretty excited to be working again.

“At first, it was fun,” Linda says of her job in a maternity clothing store. “I loved helping people look terrific. I knew that when people looked their best, they could focus on more important things.” END_OF_DOCUMENT_TOKEN_TO_BE_REPLACED

Key Director Laura Espinosa, a retired pediatric nurse practitioner from Los Angeles, can name her pain in medical terms. “I was suffering from fibromyalgia (generalized muscle pain), and TMJ (temporo-mandibular joint) headaches. I was taking 600 to 800 milligrams of over-the-counter painkillers two to three times a day,” she says. “I was very emotional and unable to focus or make decisions.” END_OF_DOCUMENT_TOKEN_TO_BE_REPLACED 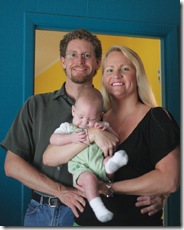 Being a mother was something that Heather Dillard, a seasoned labor and delivery nurse from Springfield, Missouri, wanted for as long as she could remember.

After ten years of infertility, Heather now stays at home with her six-month-old baby boy Declan, and she’s happy to share the amazing way Reliv made her dreams of motherhood come true.

“Not being able to get pregnant for so long was a nightmare, especially since I worked around new mothers and babies,” she recalls.

Heather suffered from mensturation cycle problems. Intrigued by the health results she experienced from taking Reliv products, she increased the daily amount of Relìv shakes. After six weeks, she had her first natural cycle in ten years.

She and her husband, Jason, were delighted to discover she was pregnant almost right away, but their son entered the world three months premature and weighed just under two pounds. Despite discouraging odds for survival, tiny Declan grew stronger. Heather credits the Reliv-enriched breast milk that nourished her son. Declan is home now and weighs a whopping 14 pounds.