You’re primed and pumped. Look out smaller jeans! Hello swimsuit! Bring on the carrot sticks! You’re ready to start losing weight and nothing can stop you. Unfortunately, this enthusiasm and resolve is only half the battle.

We fallible humans sometimes have a short attention span. After a few weeks, the process of “dieting” loses its novelty. You think that extra helping of mashed potatoes won’t hurt this time because you’ve been so good. The next day you feel you really deserve that chocolate cake — because you’ve been so good. And then why not a little ice cream before bed? Before long, you’ve fallen off the weight loss wagon. END_OF_DOCUMENT_TOKEN_TO_BE_REPLACED

Right now, millions of Americans are struggling to lose weight. Again. You may be one of them. You’ve probably tried all kinds of diets, from low-carb to weighing and measuring to a meager existence on the dreaded cabbage soup. You may have even lost weight on these diets — only to regain it and then some. It’s a frustrating exercise of losing, gaining — and giving up. Sticking to a rigid diet while trying to live a normal life is just too hard.

Reliv is tackling this weighty issue with the introduction of Slimplicity®, a revolutionary weight loss system that combines cutting-edge ingredients with smart lifestyle modifications. It’s a simple, healthy plan to safely lose weight and keep it off for good. END_OF_DOCUMENT_TOKEN_TO_BE_REPLACED 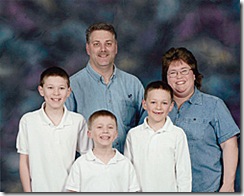 Jerryl Birchmeier, of Rochester Hills, Michigan, thought she was tired because she was the mother of three little boys — Zachary, Seth and Kyle. But the real problem was irregular blood sugar levels.

“I had a hard time keeping up with life in general,” Jerryl recalls. “I didn’t even feel like taking the kids to the park most of the time. It just felt like too much. I felt so guilty because that wasn’t the kind of mom I wanted to be.”

A specialized diet and medication did little to control her blood sugar levels, and she still felt exhausted. Jerryl, a registered nurse, ran into a colleague at a nursing conference, and he told her about Reliv. She agreed to start her family on the products.

Within the first month, she had a better sense of well-being. A month and a half later, her blood sugars started to regulate.

“I just felt like doing more. I wanted to go places again,” she says.
Jerryl was also surprised to discover she could tolerate dairy products again after being lactose intolerant for years. One son has had great results with food allergies, and her husband Mike’s joint discomfort is less bothersome.

“With Reliv, we’re starting to see more solutions instead of just problems,” she says. “I’ve got my smile back.”

When Mark Selman of Alpharetta, Georgia, learned that his fasting blood sugar level had reached 124, and his doctor started talking about medication, it “shocked” him enough to give GlucAffect® a try.

“I told my doctor about GlucAffect®, and that I planned to take the product consistently four times a day, just like in the clinical trial,” Mark reports.

At his follow-up appointment two months later, Mark learned that his blood sugar level had lowered to 97, which is within the normal range. And his weight was down, as well. “I’d lost 15 pounds, and I’ve since lost five more,” Mark states.

“I give a lot — if not all — the credit to GlucAffect®,” he continues. “I’ve never been able to lose this much weight before through diet and exercise alone — and I love the taste!

“My parents both died of cancer, and I’ve been taking the Reliv basic nutrition for the past four years primarily as a preventative measure,” Mark adds. “I know that, by eating right, exercising regularly, and now adding GlucAffect® to my nutritional regime, I’m doing everything I can to maintain optimum health, now and in the future.”

Senior Director Bill Guilford of Alpharetta, Georgia, has always done the right things to stay in shape. He eats a healthy diet and exercises regularly, doing both cardio and weight training. Yet, seemingly out of nowhere last year, Bill started to gain weight.

“I wound up gaining fifteen pounds, mostly around my mid-section,” Bill recalls. “I figured it was just a part of turning 50.”
“When GlucAffect came out, I immediately called my mom to find out who she knew that had diabetes and could benefit from the product,” he continues. “And I was shocked to find out that diabetes runs rampant in my family — my aunt, uncle and both sets of grandparents all have the disease.”

Concerned that perhaps he was experiencing the onset of diabetes, Bill began taking GlucAffect four times a day, while maintaining his diet and exercise regime. “I’ve since lost 18 pounds and am literally in better physical shape than I was in my twenties,” Bill states. “And my blood sugar level is in the mid 80s, which is fantastic. “Now I know that I don’t have to look a certain way just because I’m older,” he adds. “This product is phenomenal!”

About a year ago, Brian Edelstein was diagnosed with type 2 diabetes. Brian, who lives in a Chicago suburb and works as a project manager in the printing industry, immediately changed the way he ate and stepped up his exercise program. He did everything his doctors advised.

Like many Californians, Tracy Balough of Orange County loves Disneyland, swimming and hanging out with friends. Unfortunately, until this past spring, joint problems and extra weight prevented the 29-year-old from being able to walk a lot.

“My overall health wasn’t good,” Tracy says. “I began taking Reliv’s basic nutrition in March, had lost a little weight, and then added Slimplicity® to my diet in April.”

Four months later, the new Relìv Director has lost nearly 45 lbs. and 18% of her body weight. Tracy adds, “My energy level is terrific, I’m more active and much less self-conscious. I love that Slimplicity is so easy to use and tastes great!”