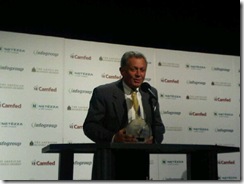 Reliv’s 24K won the People’s Choice Award by polling more online votes than innovative products made by Logitech, Rosetta Stone and other companies.

Dr. Carl W. Hastings, Reliv’s chief scientific officer and creator of 24K, said, “It is a great thrill to be chosen as the top new consumer product by people across the country. I want to thank the voters as well as everyone at Reliv who worked so hard to bring 24K to market.”

The awards were presented during ceremonies at the Marriott Marquis Hotel in New York City. The ceremonies were hosted by Cheryl Casone of Fox Business Network and broadcast nationwide on radio by the Business TalkRadio Network.

Reliv developed 24K because it saw a lack of healthy options in the energy shot category. The product, named because of its 24 active ingredients, contains no caffeine and only five calories. 24K is designed to boost energy, improve mental focus and reduce stress.

About the Stevie Awards

View all posts by Reliv