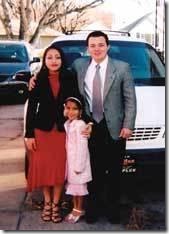 For six years, Cinthya Servín Castillo of Fremont, Nebraska, suffered chronic migraines. Her friend came to visit, “and she saw how bad I was feeling, suffering from my daily migraine,” Cinthya recalls. “She told me that she had started taking Relìv for her own headaches and that they were so much better. I wanted Reliv immediately.”

A month after starting the essential nutrition, Cinthya says her pain had significantly improved. She was also getting relief from other symptoms, including constipation and backaches.
But that was just the beginning of her Reliv renaissance. Cinthya also suffered from panic attacks and nervousness, making it difficult to be the kind of wife and mother she wanted to be.

“Now my family tells me that I look happier,” she says. “Before, my kids couldn’t be loud around me, and now they can be kids again.”Cinthya’s sense of wellbeing was so great that she wanted everyone in her family to try Reliv. “My husband, José Escobar, also suffered from chronic back pain and by day three of taking Reliv, he was noticing a difference.”
Cinthya likes her new life. “My goals are pretty big,” she says, “but now that I’m feeling so good again, I know I can achieve them with Reliv.”

View all posts by Reliv